Between September 11th and Veterans Day, we at F&M are working locally and nationally with initiatives to honor our brave service members, increase awareness of the challenges they face, and raise money to support their transition home.

Between September 11th and Veterans Day, we at F&M are working with initiatives, both locally and nationally, to honor our brave service members, increase awareness of the challenges they face, and raise money to support their transitions home.

If you would like to join us in saying thank you, we invite you to: 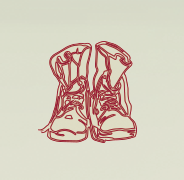 Honor local service members by emailing us a photo of your veteran in his or her “boots” along with a brief description, and the branch you frequent most. Your photo will appear on a “Thank You” board in your nearby branch.

Increase awareness of the challenges soldiers face and visit the Boot Campaign‘s website. Learn more about the organization’s mission and how they help our troops and their families with job and housing assistance, grief and family support, and wellness initiatives. Each Friday, F&M employees are wearing jeans and our “boots” in exchange for contributing to the Boot Campaign. We hope you don’t mind our casual clothing between now and Veterans Day, it is for a good cause!

Raise funds. Sign up for a day of fun and fellowship at F&M Bank’s Veterans Day Clay Shoot at the Flying Rabbit. Veterans with a military ID receive 20% off registration. Proceeds will be donated to Boot Campaign — a national nonprofit organization dedicated to cultivating awareness, promoting patriotism, and providing assistance to military personnel, past and present, and their families. If you would like to donate directly to the Boot Campaign, our CrowdRise page is the place to do so!

When Charles “Mac” McCauley arrived in the Valley in 1967, he brought with him successful careers in the military and in business as well as a genuine interest in history. He lived in the town of Timberville for more than fifteen years before becoming a member of the Town Council in 1984. Eight years later, he became mayor. One of his goals as Mayor was to establish a local museum to preserve the unique history and culture of the area for future generations.

When Charles “Mac” McCauley arrived in the Valley in 1967, he brought with him successful careers in the military and in business as well as a genuine interest in history.  He lived in the town of Timberville for more than fifteen years before becoming a member of the Town Council in 1984.  Eight years later, he became mayor.  One of his goals as Mayor was to establish a local museum to preserve the unique history and culture of the area for future generations.

In 1994 after the town had approved the construction of a new swimming pool, Mac saw an opportunity to use the old pool house as a museum.  He met with fellow town employees Richard Sullivan, Wilda Wine and Phyllis Strickler to consider his proposal.  They agreed to support the project and launched a campaign requesting artifacts for exhibits, focusing on local businesses, politicians and civic organizations.  Among the first donations received for  the proposed  museum were the Timberville Bandwagon purchased  by the town in 1895 from the town of New Market and stored at that time in the basement of the Rocking R Hardware, the current location of Plains District Museum; a 1950’s Fire Truck placed in retirement by the Timberville Fire Dept.; a cornerstone from the Zigler Cannery; a retired railroad repair car from the Norfolk  Southern  Railroad;  the Timberville Quilt handmade by local residents and donated by the Farmers and Merchants Bank; and a copy of the biography of General Norman Schwarzkopf from the General himself (husband of local native Brenda Holsinger of Timberville). (All of the above are still part of the permanent exhibits at the Museum.)

A year later, after much consideration, the old pool house was deemed an unsuitable location for a museum.  Mayor McCauley then requested permission from the council to use the Town Office conference room as a temporary site while plans could be made to construct a new building out back in the parking lot.

With the help of local resident, Dorothea Sanders, who developed a plan for the exhibits, the Mayor began to set up a Museum.  According to Wilda Wine, one of the volunteers (and the only one of the original group still active), minutes from the Museum’s Archives reported the following developments.

In Jan 1997, the Council voted to approve a new building not to exceed $13,800 in cost to house the Museum.  Construction began in June with a local contractor, Donnie Riggleman, purchasing the materials and town employees, supervised by Town Manager Tony Hinkle, providing the labor.

In October, 1998, the new Plains District Memorial Museum held its grand opening with free hotdogs and drink (a “must” for Mayor McCauley at all such events) and a ribbon cutting ceremony with Supervisor Pablo Cuevas on hand to cut the ribbon. The public was encouraged to visit the Museum anytime by picking up a key at the Town Office.

In July, 1999, Dot Sanders proposed the creation of a Board of Directors to set rules and regulations governing the rapidly increasing number of collections.  By August with the addition of 2 new volunteers, Bee Hite May and Evelyn Campbell, the Museum began to operate on a regular schedule, opening on Tues and Thurs. 1-4 pm.

The Museum was incorporated in 2004 making it an independent volunteer organization.   By then, it operated with 15 volunteers and over 500 visitors per year.

In 2008, the Museum moved to its present location in the newly renovated Rocking R Hardware Building on N. Main St.  Occasionally, we still have people come to the Museum looking for the Hardware Store.

The Museum features a central exhibit area with revolving themes;   special exhibit areas for the country stores, home and family life, local businesses and industry, farming and poultry, military history, local school history.  The Timberville Bandwagon continues to be the most prominent artifact in the Museum, but in recent years, the creation of a Digital Library of War II Veterans who died during the War, the Charles Rife Collection of Indian Artifacts, and the Charles Lohr Collection of early local pottery have become popular exhibits.

Even the most reluctant museum- goer can find something of interest among the collections:  Civil War history and artifacts (cannons, rifles, camp supplies etc.), a 1930-40’s hair permanent machine, an 1896 corn shucker, school pictures of the grandparents, and more.

Today, the Museum continues to operate 4 days each week from Thur. through Sun. 1-4 pm. serving approximately 1800 visitors each year.   It is FREE to the public – made possible by the more than 50 regular volunteers, 200 Museum members, business, civic and individual donations, the support of the town of Timberville, Broadway, and Rockingham Co., Museum fundraisers including the indoor yard sales, and special grants.

It’s Fair Season in the Valley and we’re looking forward to seeing you and your families at these great, local events!

For more upcoming events in the Valley, check out our Calendar.

Join us at the Timberville branch Saturday, August 16th between 11am-1pm for a Dry Goods Food Drive to benefit Hope Distributed’s Food Pantry. For each dry good item you bring, you will receive a hot dog and drink.