There is a newly reported phishing tactic that may prove to be very effective. Criminals, most likely using GPS data from compromised mobile phones, will use this data to craft an e-mail with accurate travel information to a specific user. The e-mail will contain a link or attachment to either gather credit/debit card information or load malware to the recipient’s device.

Remember that traffic citations are never emailed or sent out in the form of an email attachment, and report scams like this to your local police department.

A sample scam e-mail is below:

The Infraction Statement contains an image of your license plate and the citation which must be paid in 5 working days.

Safeguard Yourself & Your Family|fa-key|159|Identity Protection|1

HARRISONBURG — The lone banking company headquartered in Rockingham County isn’t going to get locked out of the county’s newest commercial area.

Farmers & Merchants Bank has purchased an acre of land at the corner of Stone Spring and Ridgedale roads from Melvin and Naomi Real Estate LLC for $740,520. The deal closed on March 1.

The property is just southwest of the Port Republic Road-Stone Spring Road intersection. It’s part of the Coffman’s Corner project near the multiuse Stone Port development.

“We wanted the greater visibility,” he said. “Anytime a connector road is built, growth tends to follow.”

President Dean Withers said he lives in Rockingham County not far from the site, and he’s been “very pleased” with the traffic volume on the road. The last leg of the road opened to traffic in July, providing access from U.S. 33 near Boyers Road to Stone Spring Road at the intersection of Reservoir Street.

Construction of the new branch likely will begin in the fall so the building can be under roof by the winter, Hayslett said. The company would look to open the site next spring.

The location will offer a full range of banking services, he said, with consumer and commercial lenders on-site. Farmers & Merchants’ investment and insurance professionals, as well as lenders with its subsidiary VBS Mortgage, would be able to meet clients at the site and could have office space there.

The bank has a branch about a mile away at 1085 Port Republic Road, its only location in Harrisonburg. Hayslett said no decision has been made about its future.

“We’re thinking we might keep the location and scale back staffing somewhat, run it almost as a satellite of the new branch, or we may close it entirely,” he said. “We’re going to start looking at traffic counts. We want to see what the counts are on the [Southeast Connector], and if they decline closer to the branch on Port Road, that will factor into our decision.”

In addition to the Port Republic Road branch, Hayslett said F&M considers the office just east of the city at the corner of Cross Keys Road and U.S. 33 to be a city location.

The Timberville-based company has been in Harrisonburg for only 10 years, he said, and it’s tried to stay on the eastern side of the city, where Rockingham County is growing fastest.

“We know Harrisonburg is too large to cover with just two branches,” Hayslett said, “and we’ve tried to stay selective and be on the east side of Harrisonburg. We think the connector road gives us the opportunity to pick up traffic we previously didn’t have.”

Farmers & Merchants operates 11 branches in Rockingham, Shenandoah, Augusta, and Page counties and one in Harrisonburg.

Article originally published in the Daily News-Record. Contact Vic Bradshaw at 574-6279 or vbradshaw@dnronline.com.

Enjoy food, games, face painting, finger printing, and much more from 11AM-1PM! Enter our cornhole tournament where all proceeds benefit Augusta County Relay for Life. Hope to see you there! 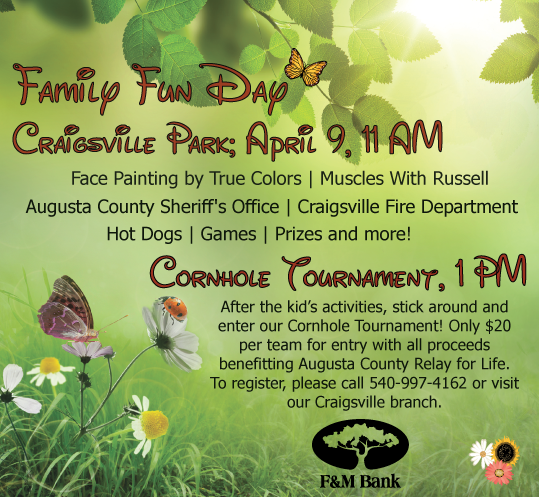