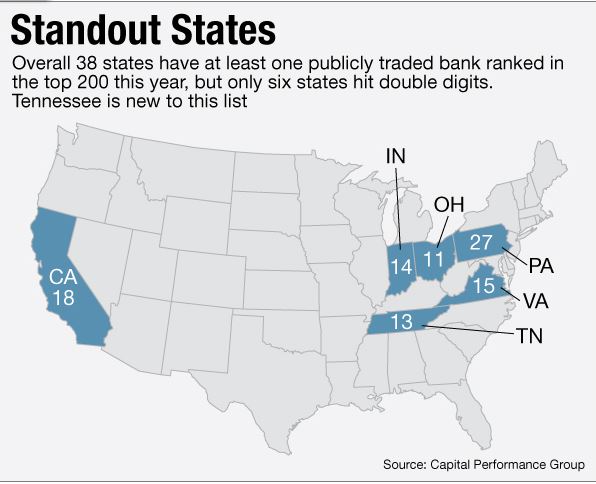 Profitability is under a lot of pressure for small institutions — expenses are up and yields on loans are down. But some are handling that pressure better than others, as our annual ranking of publicly traded banks and thrifts with less than $2 billion of assets shows.

The overall group of 684 institutions that fit the criteria for our ranking had median noninterest expense growth of 4.25% last year. For those that earned a spot in the top 200, expenses grew at an even faster pace of 5.85%.

But several factors — including loan growth and core deposit growth — helped offset the higher expenses for both the standouts and the larger peer group, which is allowing profitability to remain stable for now, according to an analysis by Capital Performance Group.

The rate at which institutions in this size range added loans improved slightly in 2015 compared with the previous year. Net loans were up a median of 8.39% for the top 200 and 8.1% for the peers.

Unlike in 2014, core deposit generation outpaced loan growth — which allowed for funding the loan growth cheaply. “This is important, as it helped ameliorate the impact of lower earning assets on the margin,” said Kevin Halsey, a consultant at CPG.

For American Banker subscribers: If you'd like an Excel sheet with all 684 publicly traded banks and additional data points such as cost of funds, core deposit growth, yield on average earning assets and ratio of noninterest expenses to average assets, send an email before May 27 to Bonnie.Mcgeer@SourceMedia.com to request a copy.