F&M Bank Tops Deposits
After nipping at their heels for six years, a small local bank has unseated large regional and national financial institutions to claim the top spot in deposit share in the Harrisonburg-Rockingham County market. The Federal Deposit Insurance Corp.’s most recent data show that F&M Bank topped all banks in the metropolitan statistical area for deposits held for the first time. F&M is a subsidiary of Timberville-based F&M Corp., the only publicly traded company headquartered in the city or county.

HARRISONBURG — After nipping at their heels for six years, a small local bank has unseated large regional and national financial institutions to claim the top spot in deposit share in the Harrisonburg-Rockingham County market.

The Federal Deposit Insurance Corp.’s most recent data show that Farmers & Merchants Bank topped all banks in the metropolitan statistical area for deposits held for the first time. Farmers & Merchants is a subsidiary of Timberville-based F&M Corp., the only publicly traded company headquartered in the city or county. 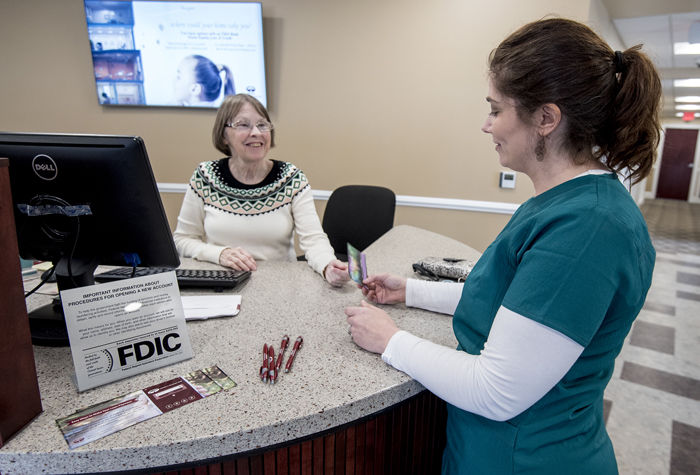 As of June 30, Farmers & Merchants held $416.5 million in deposits for customers in its seven Rockingham branches, or 18.78 percent of the total market. That represented an $18.67 million increase over the previous year.

Dean Withers, F&M’s CEO, said Monday that he wasn’t aware that the bank had reached the top spot in the market, but he considers it an important achievement.

“It’s something we’ve always tried to strive for if for no other reason than we’re competitive, and we’re a smaller community bank taking over from the large regionals,” he said.

“We’ve been the market leader in Rockingham County forever,” added Neil Hayslett, F&M’s executive vice president and chief administrative officer. “Actually overtaking [the large banks] in the entire MSA is important for some of our publicity, especially as we talk to shareholders and investors.”

BB&T, which jumped to No. 1 in 2016 from No. 3 the previous year, dropped to second last year with $407.4 million held for local customers. The Charlotte, N.C., bank’s total deposits were down $4 million year-over-year, and its market share dipped slightly to 18.37 percent.

United Bank remained in the fourth position in the rankings, with Union Bank & Trust rising a spot to make the top five.

The year was a good one locally, with total deposits rising by $64.5 million, or 3 percent, to more than $2.2 billion.

First Bank & Trust posted the greatest increase, with its deposits growing $19 million, or 39.6 percent, to $66.9 million. The rise helped the bank leap two spots to No. 8 in the market rankings.

Other big gainers were Union Bank & Trust — which recorded a $9 million, or 7 percent, rise in deposits held to $137.2 million — and Pendleton Community Bank, which saw its deposits jump by $7.4 million, or 22.6 percent, to $40 million in part because it opened a branch in downtown Harrisonburg.

Climbing To The Top

As for how Farmers & Merchants managed to overtake a major regional bank in BB&T, which has $163 billion in total deposits in all of its branches, and Wells Fargo, which holds more than $1.2 trillion for customers across America, Hayslett said the local bank has been asking customers for referrals for the last three years.

Its growth in the Staunton-Augusta County market and construction of a highly visible branch on Stone Spring Road in Rockingham County also are increasing the bank’s regional profile, he said.

“We like to think that once we have customers that they’re well taken care of,” Withers said. “It’s about customer service. You can advertise all over the place, but word-of-mouth and friends and family referrals is where you gain customers.”

Hayslett noted that each of the bank’s Harrisonburg-Rockingham branches posted deposit growth from 2016 to 2017.

Since the ranking date, F&M has closed its only branch in the city, which was on Port Republic Road in front of the Port Crossing Shopping Center, following the opening of the Stone Spring location.

But that branch and the one at Spotswood Trail (U.S. 33) and Cross Keys Road (Va. 276) are just outside the city, and Withers said they’re drawing money from Harrisonburg residents and businesses.

Farmers & Merchants operates its own secure courier service to pick up deposits from business clients within its footprint, he noted, and it also has automated teller machines in some city Food Lion and Rite-Aid locations and in the East Market Street Target store.

While the Staunton-Augusta market, which F&M entered in recent years, likely will be its main growth area for the near future, Withers said the bank will continue seeking opportunities in Harrisonburg and Rockingham.

“We haven’t really backed off that,” he said. “Obviously, that’s a more mature market for us. We’re going to do all we can to grow in both markets.”